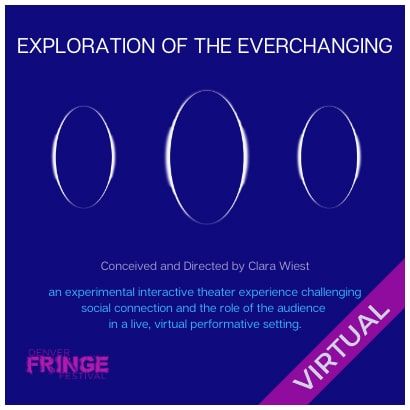 Exploration of the Everchanging

This explorative theater experience is created to be everchanging. Every performance will be different because the audience is different every time. Our experimental production is one in which the audience must reconcile with their own awareness of being a passive viewer. The piece dissects the performer-audience relationship to its core, as well as social connection through the screen. The performers engage with the audience beyond conventional means of communication and challenge the idea of cathartic reward in watching a linear narrative. Through this always honest, always truthful and always adapting piece, the performance is one that entices the audience to reconsider what they can and cannot control. The performers never pretend, they are always themselves and we invite the audience to do the same.

Note: All performance times are in MDT

Monika Orzelowski (she/her) is a theatre artist incredibly proud to have been involved with this production as the Stage Manager! Monika is a Muse Scholar studying Theatre and Arts Management at Hunter College, and currently serving as the Hunter Theatre Company's Development Director. Recent credits include Ludlow Fair (Stage Manager), Speech & Debate (Stage Manager), Eurydice (Stage Manager, Production Manager) and The Last Five Years (asst. Director/Stage Manager). Extraordinary gratitude to all who have been there along the way, and to the passionate members of this team with a story to tell.

Sophia Grasso, an AADA Company graduate, mainly spends her time working in front of and behind the camera, directing plays, and working as an usher on Broadway. With most of her resume covering films and commercials, she is ecstatic to be reconnecting to an audience as well as to herself and her fellow actors in the Exploration of the Everchanging. She’s forever grateful to her family, friends, and Peryn for their unending support. www.sophiagrasso.com

Nola Latty (they/them) is an interdisciplinary artist, focused on performance, directing, and design. Nola is approaching their senior year studying drama at New York University within Playwrights Horizons Theater School. They are keenly aware of how space, whether that be an exhibition space, a set, or a zoom call, can influence the storytelling being done within the space.  Nola has also performed in venues such as Dixon Place and Irondale with the immersive ritual, Update, (Michael Delaflor) and at H0l0 for PLASEXTA: a performance piece (Park Adams/Frank Consent). Nola strives to create with a practice of tenderness, humor, and circumstantial awareness that generates avant-garde yet intimate performances.

Clara Wiest (She/They) is an international theater director, movement director, performer and body worker in NY. Their work is predominantly original, experimental and collaborative, challenging the role of theater and the way we make theater. Having been raised in different cultures, she found an incredible strength in humility and humanity, as well as her love for the process of creation and of bringing humanity back into a collaborative rehearsal process. Credits: Company Member of LAVA Brooklyn, Director of "Exploration Of The Everchanging”, Director of "no! i be seal" by Dante Fuoco at Dixon Place, Assist. Director “In The Eye Of The Needle”. clarawiest.com