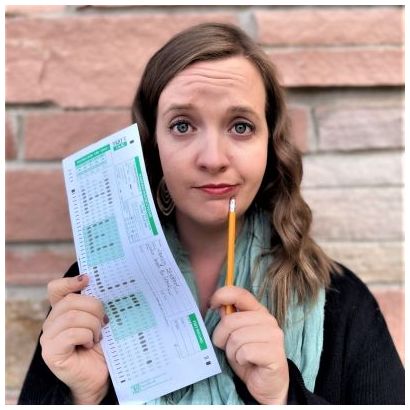 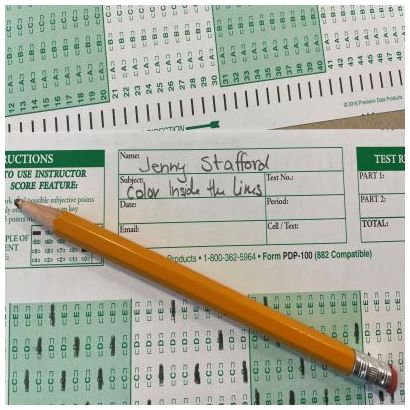 Color Inside the Lines

A palm-reading drag queen tells Jenny she’ll never find love, sending her mind reeling back to high school and a match making scheme that went horribly wrong.  Young Jenny hopefully filled the bubbles of a scantron envisioning her perfect match.  Horrifyingly her perfect match turned out to be the biggest loser in the school.  Was this whole “matching system” just a cruel hoax by the popular kids, sitting around in someone’s dad’s hot tub, laughing at the losers as they paired them up?  Maybe, but years later she wonders…what if he was her perfect match?  Questions about love, destiny, erasure, and memories collide in this comical and surprisingly touching story of growth, acceptance, and the expansiveness of love.

Stafford’s impressive resume includes writing for Broadway, Cirque du Soleil, and stages across the United States and the world.  Her work has been featured at the Lincoln Center Songbook Series, Barrington Stage, Prospect Theatre Company, The National Alliance for Musical Theatre Songwriter Salon, 54 Below, Ars Nova, Joe’s Pub, and numerous other venues. Awards include the Reva Shiner Comedy Award, finalist status for the Kleban Award, the Yale Institute for Music Theatre, the Eugene O’Neill Musical Theatre Conference, and the National Alliance for Musical Theatre Conference, and the Ronald M. Ruble New Play Competition. She has been an Artist in Residence at the Rhinebeck Writers Retreat, Village Theatre, Hypatia in the Woods, Goodspeed Musicals, CAP 21, and The Johnny Mercer Writers Colony.  Color Inside the Lines is Jenny’s second solo show and the first with music.

Penny Cole (director, producer) has been directing in Denver and across the country for over 30 years.  Favorite Denver productions include The Other Place for Boulder Ensemble Theatre, Nine Parts of Desire for Curious Theatre Company, Amadeus and La Bete, at the Aurora Fox Theatre, and The Cradle Will Rock at the University of Colorado, Denver. Other productions include The Tempest and Much Ado About Nothing (San Jose Shakespeare Festival at City College), The Black Masks (Obscene Courageous Theatre) and Scot Free: A Wild West Extravaganza, performed at the Edinburgh Festival Fringe in Scotland.

Over the past 15 years she has become increasingly involved in the development of new plays, enjoying the privilege of working with playwrights through the Athena Project, the National New Play Network, and Curious New Voices, as well as serving as the chair for the Playwriting Symposium of the Mid-America Theatre Conference.

Sarah Johnson is Outpost Repertory Theatre's Resident Dramaturg and the Assistant Professor of Dramaturgy at Texas Tech University. She was a casebook writer for Broadway's Allegiance. In regional theatre, she has provided dramaturgical support for productions with Outpost Repertory Theatre, Portland Stage, Colorado Shakespeare Festival, Athena Arts Project, Dirtyfish Theater and several playwriting clients. She completed her PhD in Theatre and Performance Studies at The University of Colorado Boulder and her MFA in Dramaturgy at the University of Iowa.

Mark Castellano is a guitarist, jazz pianist, composer and music teacher, and is currently the organ player for the Colorado Avalanche.  His composition work includes film scoring "Dinosaurs Take Flight," a touring dinosaur exhibit created by Nick and Alana Register, and composing/music directing an annual melodrama in Silver Plume, Colorado with folk legend George Downing.  He also co-wrote a musical with Stephen Bailey that was performed in 2011. As a performer, Mark performs Gypsy Jazz with Sam Cole and Deja Swing. He has provided music for high-end events across the state, including the Plain and Fancy Ball at Invesco Field.  He has been the accompanist for the vocal jazz ensemble at Metropolitan State University, the harpsichordist for the Metropolitan State University early music ensemble, and the jazz pianist for the Metropolitan State University big band. He's also worked as a session player on many recordings, and studio guitarist for PBS.